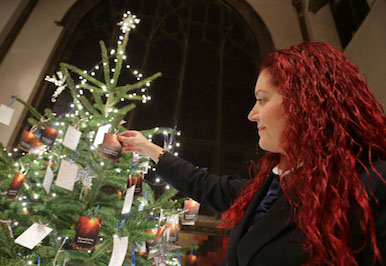 The event ran for a number of years initially from the funeral home at Baddow Road, but it became so popular that it was re-located in 2012, in the hall at St Luke’s Church. It has now outgrown that to so it has now been moved to the new venue in Chelmsford city centre.

Funeral Operations Manager Craig Jackson commented: “The Memorial evening was originally for our clients but over the years we have been joined by many locals too. It’s a lovely way for the community to get together to remember those we have lost.”

The service this year will feature special guest Essex soprano, Jane Parker who will sing solo including Ava Maria, and then lead the audience with Christmas carols. This will be followed by a memorial name call and then the blessing of the Christmas tree by Reverend, Mike Lewis.

The British Legion will cover the Last Post after which Jane’s 12 year old daughter, Grace Parker, will sing Amazing Grace. The public will then have the opportunity to light a candle and leave a message for their loved ones on the tree.

Once the service has finished, all will be treated to mince pies and a hot mulled drink to round off the evening.